Wellington Quest for the Best 2015 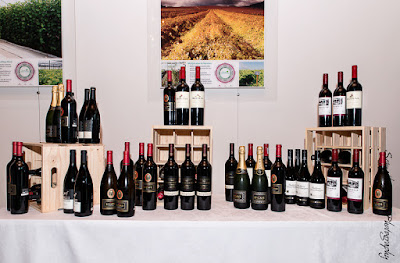 Our team at Au'de Hex had the privilege to cater for this amazing Awards Ceremony of 42 people.
I was beyond excited: This was my first ever food and wine pairing ... and yes I know I said that Valentine Day's five course menu was my first and propably the highlight of 2015 for me... Quest for the best came a very close second place. 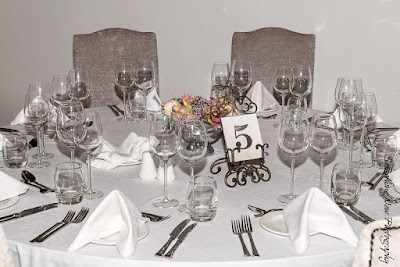 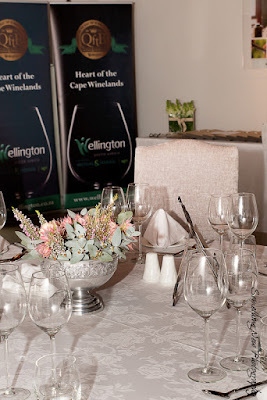 Growing up in this beautiful valley of  Wellington surrounded by our beautiful mountains and vineyards naturally my favorite alcholic beverage is wine. But nosing flavors in wine and pairing it with food was a challenge of epic proportions.
With the help of good friend and wine expert +Janine Eybers and +Pierre Bester I had great success in identifying flavors and tastes in the top 10 wines and successfully created a menu that made me so excited I hardly slept for three days. 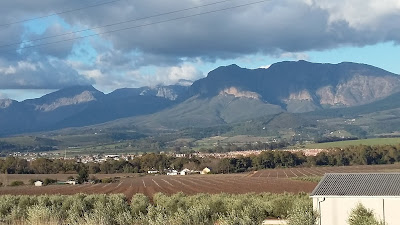 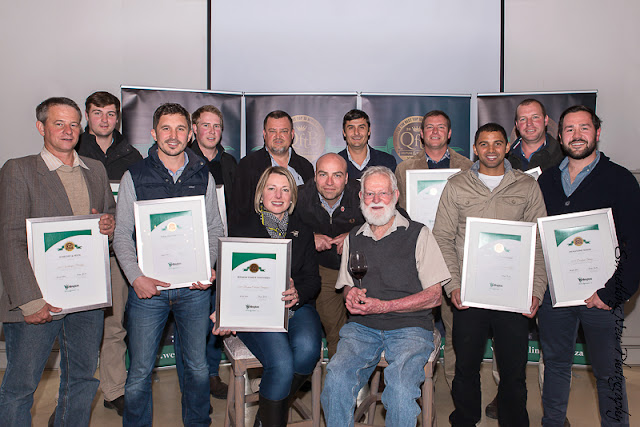 
With only La Cave Chenin Blanc 2014 as a white wine and La Cave MCC 2011 as a sparkling wine I decided to serve these two exquisite wines with the Canape's.
Pairing the MCC with the richness of salmon, a slight nuttyness from sesame seeds and a sharpness from a lemon aioli worked beautifully.
The Chenin with a slight woody nose went well with the rich earthiness from chicken liver pate served on a crostini and a slightly sour Sundried Tomato Pesto Risotto Croquette. 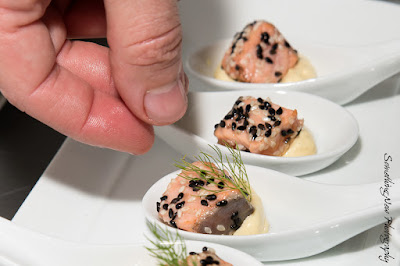 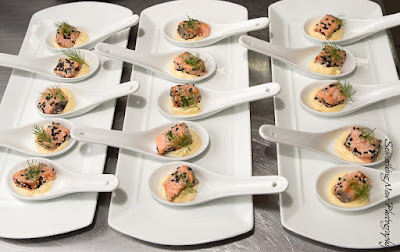 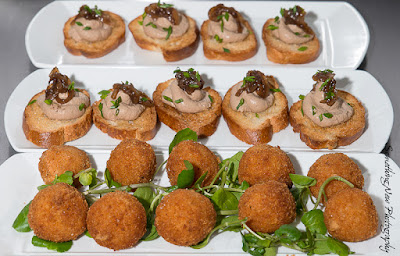 Chicken Liver Pate served on Crostini and Sundried Tomato Risotto Croquettes
As Pinotage is a red wine grape with a South African signature I really wanted to make Welvanpas Pinotage 2012 and La Cave Pinotage 2014 the star of the starter.
I decided to pair it with a mixture of white meat.
A Pork and Chicken Terrine served with Balsamic Beetroot and a Coffee Pinotage Jus.
While the fatiness of the bacon wrapped around the terrine will cut through the tannins in the pinotage it will compliment with the coffee jus and the earthiness from the beetroot. 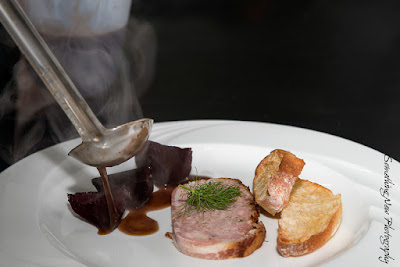 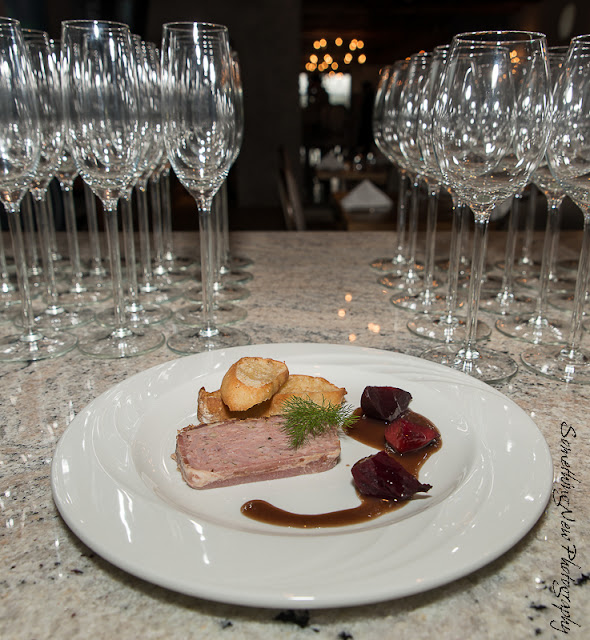 As for the mains, I decided to go with the Bosmans Cabernet Sauvignon 2008 and Diemersfontein Cabernet Sauvignon 2013. Even before tasting the Bosmans Cabernet Sauvignon I knew it's going to be a good wine and I was not dissapointed.
With a strong smokey and stoned fruit nose with spices like cloves and nutmeg a simple but flavorsome dish sprang to mind.
Grilled Duck Breast served on Chinese Broccoli with a Red Wine Jus, Sweet Potato and Turnip Dauphinoise  and Traditional spiced Quince.
The grill gave the protein a smokey taste, the broccoli created texture and freshness while the sweet potato and turnip created a tangy sweet earthiness and the quince simply tied the whole dish together.
I have never had the opportunity to cook duck breast  for a function. I was beyond nervous. Not just for the pairing but the cooking and getting it exactly perferct...And perfect it was;-) 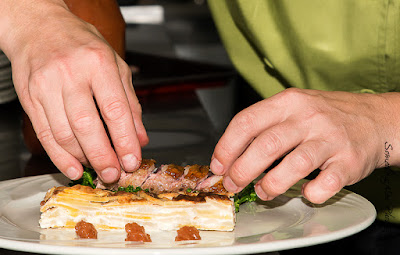 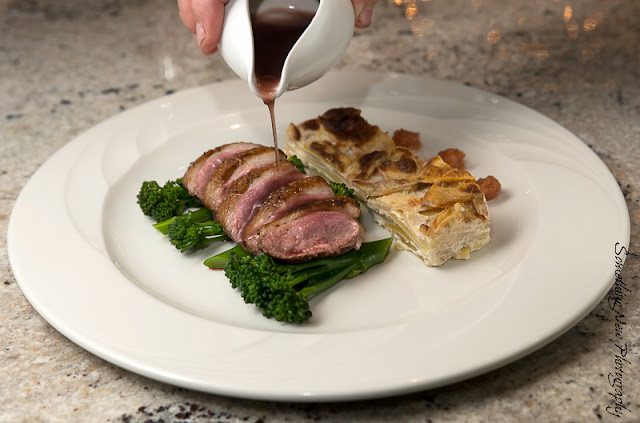 For dessert the Dunstone Shiraz made me go back to South African roots of vanilla and spices.
Milktart Springrolls served with an Eggnog Ice Cream.
The cinnamon and nutmeg flavors of milktart with the cruch from the springroll worked well and to add some more spice I made an American Classic into an Ice Cream. 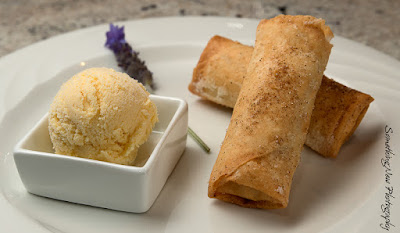 
One week later and as I look back at The Quest for The Best I am still proud with a tremendous feeling of achievement. And that's a feeling that will take me some time to shake off.
I want to thank my awesone team and front of house for a fantastic service. 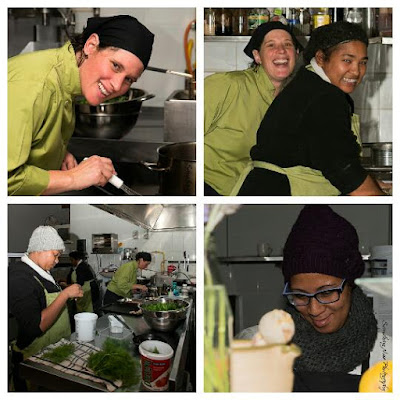 Too Anchen for your last and best function, thanks for all you support and friendliness, I'll miss you! 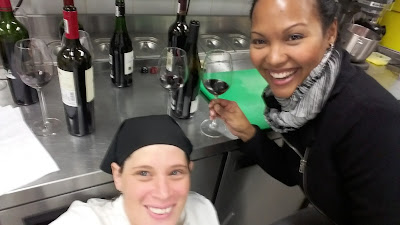 A big thank you to Maritha, our fantastic photographer from Something New Photography, whom captured special moments in and around the kitchen at Au'de Hex.